Posted on April 24, 2020 by BiblioLennLibrary

It has been months since I read this electrifying book, which is a Canada Reads selection this year. So today I sat down in front of my laptop and asked myself what I remembered about Small Game Hunting at the Local Coward Gun Club. 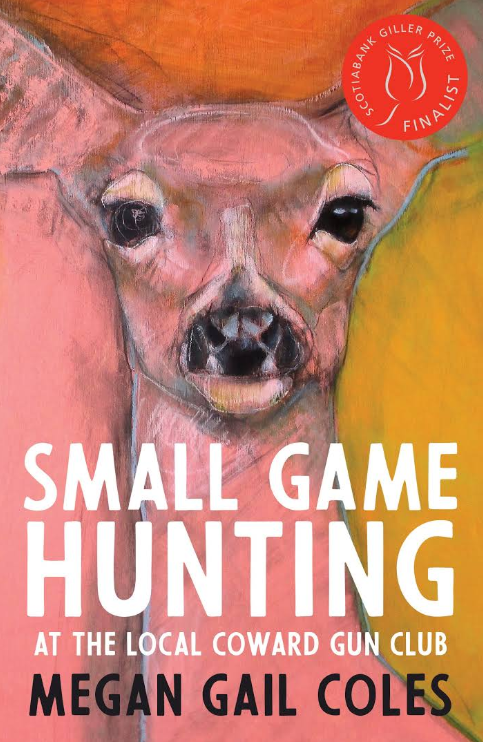 I remember that reading this novel is like opening yourself up to a slap across the face. Through her raw yet delightfully poetic word art, Coles expertly displays the lines dividing humans. She ushers in an understanding in the reader of how these lines are visible to some, ignored by others, and reinforced by those in power and their systems.

I couldn’t put this book down. In a time of shortening attention spans and 24 hour news cycles and all the bestsellers at my fingertips through my Kindle app, I am a little reluctant to admit that I sometimes stop reading even good books part way through, to move on to the next thing. But I burned through Small Game Hunting at the Local Coward Gun Club in a couple of evenings.

This book is set in St. John’s, Newfoundland during a February storm. An eclectic cast of characters with ties to an upscale downtown restaurant, The Hazel, are revealed to us over the course of a day and evening. We come to know their pasts and scars and foibles intimately, and the whole affair culminates in the trendy restaurant. The Hazel, with its unwitting host of customers, some of them implicated in crimes and injustices in various ways throughout the novel, even serves as a metaphor for the strange human experience Coles serves up. There is the visible front dining room, with people trying to act like good, upstanding citizens, and the steamy, rooty kitchen, where dark secrets are revealed.

We have Olive, a young, indigenous woman, and Iris, a struggling artist and waitress, both from Newfoundland’s Great Northern Peninsula, whose experiences serve to present the great historic rural/urban divide in this province. We have Omi, an immigrant from Nigeria who works at the restaurant. We have John, the owner, and his privileged wife, George. We have Damian, the gay waiter. We have Calv and his friend, Roger, two goons who have never been taught (or refuse to understand) that women should be given the opportunity to consent to a sexual act.

Coles gives us all these characters and more, and shows us how they have learned to accept a larger or smaller heap of suffering depending upon their station in life. There is an uncomfortable feeling of “knowing one’s place” in this novel:

I’m … not all white. Not really. Part Indian.

And that was the first time Olive had said it aloud to a stranger.

…So who are your relations?

And Olive is embarrassed because it’s true. She doesn’t know her

relations. Some were accidentally lost, others mispronounced on

purpose. Few could read the little paperwork they had to prove

themselves before the flames came. Never was there a parish hall

stove and a minister in his cups. St. John’s burns down encore and

all applaud the rebuild while Olive’s forgotten place is blamed

indefinitely for reckless kindling. The wealthy are permitted

Coles forces us to contemplate daily insults to human dignity via street interactions, an extra-marital affair, and a brutal sexual assault. Through it all, there is an undercurrent of helplessness, as characters who somehow know better take the cowardly path.

Small Game Hunting at the Local Coward Gun Club is chock-full of visceral images, swear words, drinking, sex and drugs. Coles reveals not only the dark underbelly of St. John’s, but the underbelly of humanity. And she deftly explains the historical and societal implications of each uncomfortable act: “Damian let that girl walk out of there without trying to help her. Didn’t even ask if she was okay. Didn’t even call her a cab…Though Damian was quick to defend himself because he was taught… to perpetually feel deservedly under attack.”

The power dynamics between rich and poor, indigenous and white, and male and female are not just implied in this book, they are wildly real and complex. The wayward behaviours of each character are punctuated by rich explorations of their childhood traumas and present-day stressors.

All of this is set against a backdrop of cold and slush. Light a candle when you read this book, and have a sweater nearby. You will feel the needles of sleet spraying from the tires of the passing oil workers’ trucks. You will shed a tear for tender skin.

There is no hero in this story. Rather, there is a call for all of us to do better, to speak out more, to have some dignity, and to look after those less fortunate than ourselves.

This book is available at the Bibliothèque Lennoxville Library.

Note: Guest reviewer Janine Taylor-Cutting is a lifelong Newfoundland resident, guidance counsellor, blogger (A Year of Weather), and Melanie Cutting’s daughter-in-law. Small Game Hunting at the Local Coward Gun Club is the fifth and last book to be reviewed from this year’s Canada Reads competition. The local version of the event took place in Lennoxville March 11, but the official Canada-wide CBC event slated for later in March was postponed until later this year due to public health concerns.

The Lennoxville Library, in Quebec's Eastern Townships, offers free memberships to all residents of Sherbrooke. We have a great selection of books in French and English, plus books on tape and CD, too! Check out our large-print section, our graphic novels... La Biblio Lennoxville se situe dans les Cantons-de-l'Est du Quebec. Les residents de Sherbrooke peuvent devenir membre gratuitement. Nous avons une grande selection de livres en francais et en anglais. Venez donc nous voir! Hours/Heures d'ouverture: Mardi-Tuesday, 10am to 5pm -- 10h a 17h Mercredi et Jeudi -Wednesday and Thursday, 10am to 6pm -- 10h a 18h Vendredi-Friday, 10am to 5pm -- 10h a 17h Samedi-Saturday, 11am to 4pm -- 11h a 16h Pour plus d'info, vous pouvez nous trouver au http://www.bibliolennoxvillelibrary.ca/ Click on the above to get to our website!
View all posts by BiblioLennLibrary →
This entry was posted in Uncategorized. Bookmark the permalink.